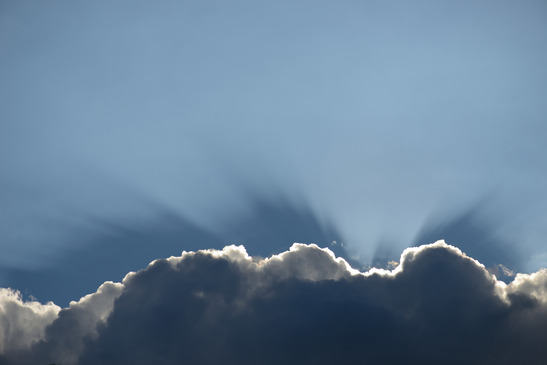 Sometimes a bad situation can’t be avoided. No matter how hard you try, there’s just no way around it but through it. In that case, try to find the silver lining in the cloud of the situation.

There are other bad situations that can be avoided and we keep finding ourselves mired in them, because we haven’t realized that we need to [or don’t care to] take an alternate route out of those situations.

This is when mediocrity and complacency set in. We just keep dealing with the bad because we suffer from what I call “silver lining syndrome.” Instead of trying to better our plight, we start with the”it could be worse” or “at least” statements. You know what I’m talking about:

There are situations in this life that we have to deal with, and we should definitely try to find the positive or good in those situations.

Things we don’t have to deal with, but we deal with them because we don’t want to muster the strength or courage to effect the type of change in our lives that would remove us from the hassle, is an indication that we suffer from “silver lining syndrome.”

My motto: It’s not always easy, but it’s usually simple.

True, a simple solution isn’t always the easiest one to implement, but it needs to be implemented, nonetheless.

Stop putting up with nonsense that you don’t have to put up with.

Another one of my mottos: DO IT SCARED!

Simply put, there are times when you should be looking for the silver lining in the cloud of the situation. However, if you find that most things or everything is bad, but you keep looking for the good in it all, then you suffer from “silver lining syndrome,” and you need to make some changes.

These may not be changes you can make on your own, so don’t be afraid to reach out to a family member or a friend. You may even find that you need a mental health professional or a lawyer. Whatever the case may be, do it!

Life will be so much brighter once that cloud is gone. A silver lining will never shine as brilliantly as the unobstructed face of the sun.

3 thoughts on “Do you suffer from “silver lining syndrome?””